Home » What Are the Festivals in New Taipei City?
DestinationTaiwan

What Are the Festivals in New Taipei City? 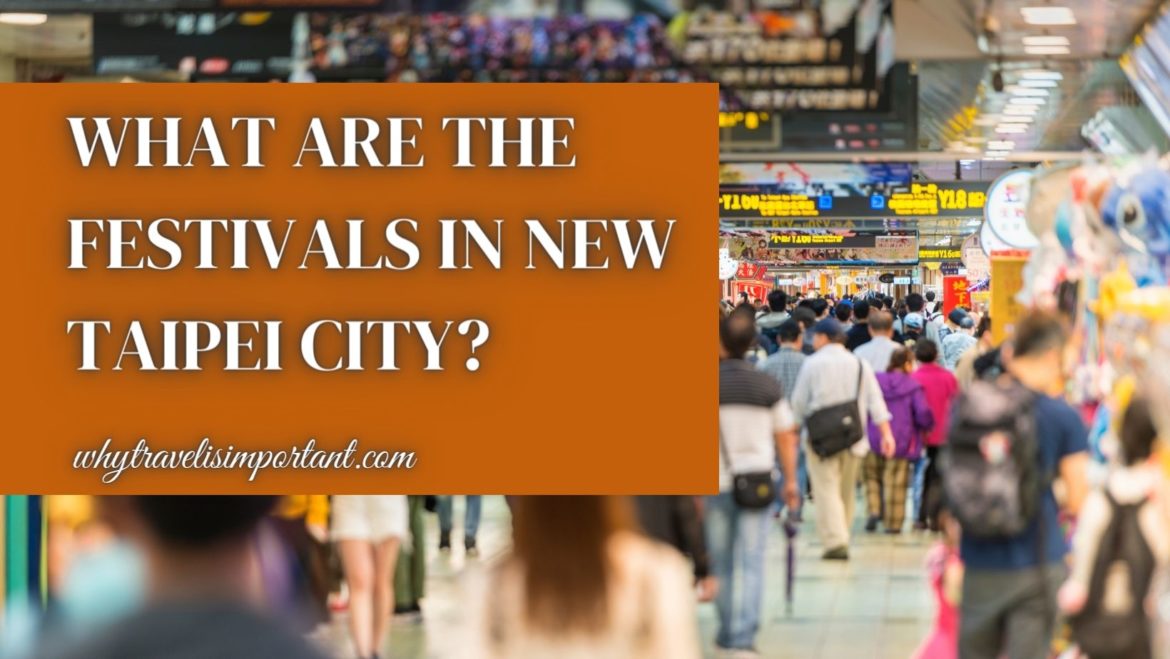 What are the festivals in New Taipei City? One of the most significant attractions of Taiwan is its diversity of festivals. The biggest celebrations are in the Chinese region and various other religious festivals throughout the country.

Getting a taste of Taiwan’s culture is crucial to understanding its traditions. Read on to check out the overview of the various festivals commonly held in the country.

The Spring Festival is Taiwan’s national holiday on the first day of the lunar month. It begins on December 30 and ends on the fourth day of the month. The Western calendar also dictates that the festival dates fall in January and February.

During the Spring Festival, various traditional customs are happening. One of these is setting off fireworks to scare away the beast known as Nian. According to Chinese folklore, the creature would come out of hiding and attack the people looking for food on New Year’s Eve.

During the festival, the villagers put up red lanterns and spring couplets to scare away a beast they believed was threatening them.

You can witness this festival on the first full moon of the lunar year. In Taiwan, people celebrate it with the traditional practice of carrying paper lanterns and solving riddles.

During this time, people also eat glutinous rice balls made from sesame, peanut butter, and red bean. There are many different types of lantern festivals held in other regions.

The Qingming Festival, celebrated on the 5th or 6th of April each year, is regarded as one of the most significant festivals in Taiwan. Since it falls on a children’s day holiday, many people take a break from work and school to celebrate this holiday.

It is famous as the second-longest national holiday in Taiwan, and many people take a holiday of up to five days.

During this period, many families in Taiwan visited their ancestors’ graves and cleaned them. They also pray and make offerings to their loved ones. They additionally burn joss paper and traditional food dishes to honor their ancestors.

Families can bond with their living relatives and reunite with their old friends. Many large family groups hold special ceremonies to celebrate the festival. This event is regarded as a spectacle to behold.

The custom of eating moon cakes during the Mid-Autumn Festival dates back to the Yuan Dynasty. During this time, the people suffered from a cruel government, and they organized a rebellion. Zhu Yuanzhang led the revolution and sought to unite the various resistance groups.

Due to the government’s heavy presence, it was hard for people to pass messages to the Resistance. On August 15, Zhu Yuanzhang told his subordinates to write “Uprising” on slips of paper and distribute them to the resistance forces.

On August 15, the rebel armies came together and declared their rebellion. After the uprising was successful, Zhu Yuanzhang celebrated by eating moon cakes with the soldiers.

The festival commemorates the life of Qu Yuan, a minister, and poet killed during the Warring States period in the ancient state of Chu. According to legend, he vanished after criticizing the emperor’s decision to ally with the Qin. He later committed suicide by jumping into the river. The incident occurred on the fifth day of the lunar month.

After his death, the people went to the river to retrieve his body. They then dropped zongzi into the river to prevent it from getting eaten by the fish and shrimp.

During the Dragon Boat Festival, people traditionally eat zongzi and race their dragon boats to honor and remember the festival’s founder, Qu Yuan. Other customs include drinking realgar wine and carrying incense to ward off evil spirits.

While Western countries celebrate the love holiday on February 14, many Asian countries observe a different holiday known as the seventh day of the lunar calendar. It is the day when lovers Niulang and Zhinu can meet in heaven.

According to a Chinese legend, Niulang fell in love with the fairy daughter of the Jade Emperor, who was known as Zhinu. Since he had to marry her, he knew that she would never be able to return to heaven. When the Queen Mother learned that they were married, she made a silver river separating them.

Queen Mother was eventually pitying and allowed the pair of magpies to build a bridge over the silver river to catch up with each other. This special occasion occurs once a year during the seventh month of the lunar year.

Grappling with the Ghosts

The Grappling with the Ghosts pole-climbing competition is happening during Ghost month in Taiwan.

Many people from Fujian and Guangdong provinces migrated to Yilan during the early days of the region’s development. Due to various natural disasters and accidents, many of them died. They were afraid that their souls would not resurrect.

During this month, people in Toucheng hold pole-climbing ceremonies to remember those who have already passed away. In addition, the residents of the city, which was the first place to be developed in Yilan, participate in a Universal Salvation ceremony. On the last day of the month, the gates of the netherworld close.

The Zhongyuan Festival celebrated in Taiwan is a time of intense energy and enthusiasm. During this period, people flock to the temples to offer fruits, flowers, and meat to the ghosts. People who can’t go to the temples also set up elaborate altars outside their homes.

During this month, people pray for their deceased loved ones and universal salvation. They also prepare various types of food for each other. They refer to it as Zhongyuan Pudu. The locals usually prepare duck, chicken, and fish dishes for each other.

The goddess of mercy, also known as Guanine, is regarded as one of the most important deities in Taiwan. This festival is widespread in various Buddhist temples. The central locations of this event are the Longshan Temple and the Zizhu Temple. There are many things to see and do in this area.

This festival features various activities such as food distribution and martial arts performances if you’re interested in learning more about local culture.

Although many Taiwanese traditional and religious festivals are well-documented, the events and dates of many local tribal and aboriginal festivals are still in mystery.

Even the indigenous members of the community are not aware of the various events that are happening in these areas. The local village elders are the only ones who know the exact dates of the festivals.

You might be able to witness an aboriginal cultural event if you’re lucky. However, be aware that these individuals are not fond of turning their culture into a spectacle. Also, no cameras are allowed during this period.

What are the famous festivals in New Taipei City and Taiwan in general? In Taiwan, traditional festivals are trendy. Most people enjoy celebrating these festivals as they allow them to spend time with their families and friends and not have to go to work.

Many stores in the country also carry seasonal products, which makes the atmosphere even stronger. If you are planning on visiting Taiwan, make sure to experience these festivals.

11 Perfect Summer Getaways In The Philippines

11 Perfect Summer Getaways In The Philippines